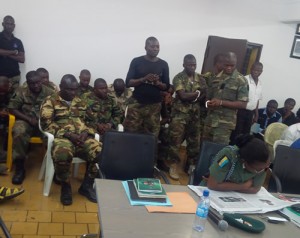 The Nigerian Military on Friday warned politicians in the country against using political campaigns to undermine its operations.

This was apparently in response to a recent call by the Rivers state governor and Director-General, All Progressives Congress Presidential Campaign Organisation, Chibuike Amaechi, where he encouraged soldiers to protest against the Federal Government.

“In view of the series of insinuations, allegations and false claims being made by certain activists and politicians on the legal and disciplinary process in the Nigerian military, the Defence Headquarters finds it necessary to make this call,” a statement issued by the Director of Defence Information, Maj.-Gen. Chris Olukolade, said.

“Politicians should avoid using the forum or medium of their political campaigns to incite or endorse acts of indiscipline in the nation’s military establishments.

“This call has become necessary as the trend got to another level on Tuesday when a prominent politician declared that soldiers have the right to protest Federal Government’s failure to fully equip them.

“It was expected that the fellow quoted or his party would have made immediate moves to correct this fallacy or erroneous impression being propagated, especially in view of the level of knowledge of his principal and candidate in the forthcoming elections.

The statement said since no such gesture was forthcoming there was the need to caution against “the propagation of this dangerous idea before it causes more problems’’.

“The military institution, for the avoidance of any doubt, rejects this declaration and its intention in all ramifications,” the statement read.

The military explained further that its law, as recognised by the Constitution of the Federation, is an appropriate legal document for the management of affairs of the military.

“The processes it outlines for handling military offences remain legal and will continue to be applied in the interest of the nation’s security and democracy.

“Individuals and interest groups seeking to play to the gallery by being meddlesome, sensational or mischievous in interpreting developments in the military are advised to moderate their activities with some decorum.

“It is clear that the false accusations which depend on unsubstantiated allegations being peddled about the military operations in Nigeria are intended to tarnish the reputation of the military and its leadership.

“The campaign apparently aimed at undermining constituted authority in the military must not be encouraged,’’ it said.

The statement noted further that the war on terror is not all about equipment, but mindset of both the military and the public, and inciting remarks can only compound the situation for all involved.

It however noted that “The Nigerian military has resolved not to yield to whims and caprices of those seeking to undermine its system purely for populist or political ends.”