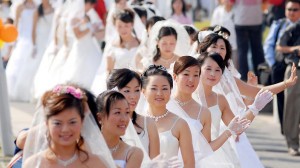 Chinese police are on the trail of more than 100 Vietnamese brides who vanished after marrying bachelors from a poor rural area of the country, with reports suggesting that an organised ring could be behind the disappearances. Read more from ABC news:

The grooms, from Quzhou in northern Hebei province, were introduced to the women by Wu Meiyu, a Vietnamese bride who had lived in the area for 20 years, the China Daily said.

Ms Wu, who received payments of more than 100,000 yuan ($19,000) if the introductions were successful, also disappeared with the 100 women, the report added. The state-run newspaper cited an unnamed local official saying an organised ring might be involved in the mass disappearance.

“With the advanced communication techniques of today, it’s easy for all the brides to leave at the same time,” the man told the newspaper. Buying wives from south-east Asian countries has become increasingly common in some of China’s poor rural areas, where a gender imbalance has developed due to a traditional preference for sons and the country’s family planning policies.

Across China, 118 males are born for every 100 females, according to government statistics. In some rural areas men can be expected to own a house, car, and have considerable wealth before they can attract a Chinese bride, a cost the China Daily said could reach 400,000 yuan.