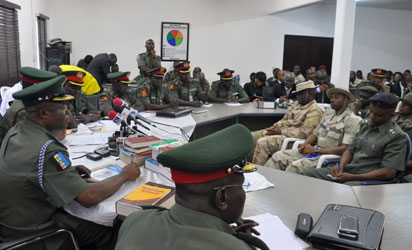 Human rights lawyer, Mr. Femi Falana (SAN), on Thursday described as dubious, the judgment of a General Court Martial in Abuja, which on Wednesday sentenced 54 soldiers to death for conspiracy to commit mutiny.

Falana said in a statement that the soldiers should never have been convicted for mutiny in the first place for refusing to embark on a mission to fight the well-armed armed Boko Haram sect without being provided with the necessary motivation and weaponry.

The Lagos lawyer, who was the defence counsel for the batch of 59 soldiers tried by the military court, said the troops’ disobedience to the said order was a refusal to commit suicide.

The Brig.-Gen. Musa Yusuf-led court martial in its judgment convicted the soldiers for disobeying an order of their commanding officer on August 4, 2014.

However, five out of the 59 soldiers that were prosecuted were discharged and acquitted by the GCM.

The soldiers, most of whom joined the army in 2012 with ages ranging between 21 and 25, were of the Special 111 Battalion in Maiduguri.

Their commanding officer, Lt.-Col. Timothy Opurum, was said to have asked the soldiers to proceed on a mission to recapture Delwa, Balubulin and Damboa in Borno State from the Boko Haram terrorists, an order which the soldiers allegedly refused to carry out.

In his statement yesterday, Falana said the judgment was characterised by “gross miscarriage of justice” and the acquittal of five of the 59 accused soldiers was “to give the false impression that the dubious verdict was fair and just”.

He insisted that the judgment would not stand, adding that he would explore all legal avenues to stop the army authorities from giving effect to ‘the genocidal verdict’.

He said, “Convinced that soldiers who made a legitimate demand for equipment to fight the insurgents cannot, by any stretch of imagination, be properly convicted for mutiny we shall take all necessary legal measures to prevent the army authorities from giving effect to the genocidal verdict of the court-martial”.

Falana explained in his statement entitled, ‘Halt the genocidal elimination of Nigerian soldiers’, that the oath of allegiance taken by the soldiers was not a license to commit suicide.

He said, “We submit that the oath of allegiance taken by the accused soldiers is not a license to commit suicide.

“It is a solemn undertaking to defend the nation based on the expectation that the Federal Government would have complied with Section 217 of the Constitution on the mandatory requirement to equip the armed forces adequately.

“It is important to state that when equipment was made available on 18 August 2014, the accused soldiers fought gallantly”.

According to the lawyer, “The soldiers were in the SF 111 Battallion which has 174 instead of 750 soldiers.

“The soldiers in the Battalion were neither equipped nor motivated. They are young men whose ages range between 21 and 25. Most of them joined the army in 2012.

“With little or no training whatsoever they were deployed to fight the dreaded Boko Haram sect.

“The funds allocated for payment of the salaries and allowances of the soldiers and for purchase of arms and ammunition are usually diverted and cornered by corrupt military officers.

“Instead of bringing such unpatriotic officers to book the military authorities have engaged in the diversionary tactics of wasting the lives of innocent soldiers by sentencing them to death without any legal justification”.