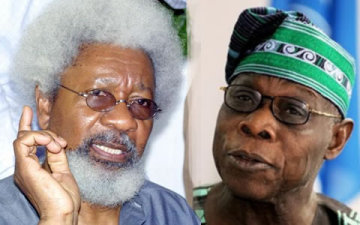 Nobel laureate, Prof. Wole Soyinka has described Former President Olusegun Obasanjo’s autobiography, ‘My Watch’, as a narrative by a career liar, who is always determined to crookedly project himself above his true standing among men.

Obasnjo had written about Soyinka in his book, where he called him a self serving critic. “For Wole, no one can be good, nor can anything be spot-on politically except that which emanates from him or is ordained by him.”

“He is surely a better wine connoisseur and a more successful “aparo” (guinea fowl) hunter than a political critic, not to talk of what he would do as a politician,” Obasanjo wrote. “I take him seriously on almost all issues except on the political particularly Nigerian politics.”

In his rebuttal to Obasanjo’s claims, Soyinka, yesterday, wrote a treatise, titled Watch and Pray, Watch and Prey, the Nobel Laureate wrote:

I had fully attuned myself to the fact that our Owu retiree soldier and prolific author is an infliction that those of us who share the same era and nation space must learn to endure. However, it does appear that there is no end to this individual’s capacity for infantile mischief, and for needless, mind-boggling provocations, such as his recent ‘literary’ intrusion on my peace.

Perhaps I ought to interrupt myself here with an apology to some mutual acquaintances – ‘blessed peacemakers’ and all – especially in this season of ‘peace and goodwill to all men’. Please know that your efforts have not been entirely in vain. I had a cordial exchange with Obasanjo over the phone recently – engineered by himself, his ground staff and/or a chance visitor – when I had cause to visit his Presidential Laundromat for the first time ever. During that exchange, I complemented him on making some quite positive use of landed property that was acquired under morally dubious circumstances, and blatantly developed through a process that I denounced as ‘executive extortionism’. That obscene proceeding has certainly set a competitive precedent for impunity in President Jonathan’s recent fund-raising shindig, editorialized in THE PUNCH (Dec. 23, 2014) as “Impunity Taken too Far”. So much for the latest from that directions – we mustn’t allow Handing-Over notes between presidents to distract us for too long.

To return to our main man, and friendly interventionists, you may like to note that I went so far as to engage him in light banter, stating that some of his lesser sins would be forgiven him for that creative conversion of the landscape – a conversation that he shortly afterwards delightedly shared with at least three mutual acquaintances. I promised a follow-up visit to view some mysterious rock script whose existence, he informed me, was uncovered by workers during ground clearing. The exchange was, in short, as good as ‘malice towards none’ that any polemicist could hope to contribute to the ongoing season of peace and goodwill. Obviously that visit will not now take place, any more than the pursuit of vague notions of some creative collaboration with his Centre that began to play around my mind.

That much I do owe you from my report card. Perhaps you will now accept that there are individuals who are born incorrigible but, more importantly, that some issues transcend one’s personal preferences for harmonious human relationships even in a season of traditional good will. The change in weather conditions sits quite well with me however, since we are both acquainted with the Yoruba proverb that goes: the child that swears his mother will not sleep must also prepare for a prolonged, sleepless infancy. So let it be with Okikiola, the overgrown child of circumstance.

One of the incessant ironies that leapt up at me as I read Obasanjo’s magnum opus was that we are both victims of a number of distasteful impositions – such as being compelled again and again to seek justice against libel in the law courts. I felt genuine empathy to read that he still has a pending thirty-year case instituted by him against his alleged libelers! Judgment was delivered in my favour regarding one of the most nauseating only this year, after surviving technical and other procrastinations, defendant evasions and other legalistic impediments for nearly as long as his. That leaves only a veritable Methuselah on the court list still awaiting re-listing under the resurrection ritual language known as de novo. Unfortunately, not all acts of defamation or willful misrepresentation are actionable, otherwise, my personal list against this newly revealed fellow-sufferer would have counted for an independent volume of the Nigerian Law Report since our paths first crossed during the Civil War. My commitment to the belief in the fundamental right of all human beings NOT TO BE LIED AGAINST remains a life obsession, and thus demands, at the very least, an obligation of non-commission among fellow victims.

I must therefore reserve a full, frontal dissection of Obasanjo’s My Watch for later, most especially since the work itself is currently under legal restraint and is not readily accessible to a general readership. So, for now, let me single out just one of the most glaring instances of this man’s compulsive career of lying, one sample that the media can readily check upon and use as a touchstone – if they do need one – in assessing our author’s multifaceted claims and commentaries on people and events. I refer here to the grotesque and personally insulting statement that he has attributed to me for some inscrutable but obviously diversionary reasons. In the process, this past Master of Mendacity brazenly implicates an innocent young man, Akin Osuntokun, who once served him as a Special Adviser. Instead of conferring dignity on a direct rebuttal of an ignoble fabrication, I shall simply make a personal, all-embracing attestation:

I despise that species of humanity whose stock-in-trade is to concoct lies simply to score a point, win an argument, puff up his or her own ego, denigrate or attempt to destroy a fellow being. However, even within such deplorable species, a special pit of universal opprobrium is surely reserved for those who even lack the courage of their own lies, but must foist them on others. When an old man stuffs a lie into the throat of an age-mate of his own children – omo inu e! – we can only pity an irredeemable egomaniac whose dotage is headed for twilight disgrace. 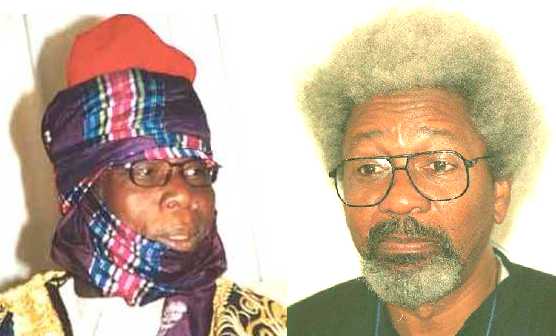 D.O. Fagunwa, the pioneer Yoruba novelist, was a compulsive moralist. I suspect that he may have exerted some influence on our garrulous general, resulting in his pupil’s tedious, misapplied and self-serving deluge of moralizing. It seems quite likely indeed that the ghostly, moralistic hand of Fagunwa reached out from the Great Beyond, sat his would-be competitor forcefully before a mirror and bade him write what he saw in that image. I invoke Fagunwa because, at his commemorative colloquium in Akure in August last year, I drew my audience’s attention to a remarkable passage in Fagunwa’s Igbo Olodumare. The passage had struck me during translation and stuck to my mind. I found it uncanny that the original creative moralist, Fagunwa, had captured the psychological profile of a being whom I have been compelled by circumstances to study as an eerie creation, yet this was a character Fagunwa was unlikely to have encountered in real life at the time that he produced that work.

The section comes from an account of a visit to the abode of Iku, Death, the terrifying host to Olowo-aiye, the narrative voice of the adventure. Iku, the host, had been admonishing his guests through the histories of seven creatures who were not permitted a straightforward passage to Heaven or Hell, but were subjected to admonitory punishment at the halfway house to the abode of the dead. The most horrendous tortures were reserved, it would seem, for the last of the seven such ‘detainees’, and I invited my audience to ponder if they could identify any prominent individual, a public figure whose life conduct seamlessly fitted into Fagunwa’s portrayal, which went thus:

“The seventh…. is not among those who set out to improve the world but rather to cause distress to its inhabitants. It was through manipulations that he attained a high position. Having achieved this however, he constantly blocked the progress of those behind him, this being a most deplorable act in the eyes of God, and rank behaviour in the judgment of the dwellers of heaven – that anyone who has enjoyed upliftment in life should seek to be an obstacle for those who follow him. This man forgot the beings of earth, forgot the beings of heaven, in turn, he forgot the presence of God. The worst kind of behaviour agitated his hands – greed occupied the centre of his heart, and he was a creature that walked in darkness. This man wallowed in bribery, he was chairman of the circle of scheming, head of the gang of double-dealing, field-marshal of those who crept about in the dark of night. With his mouth, he ruined the work of others, while he used a big potsherd to cover the good works of some, that others might not see their attainments. He nosed around for secrets that would entrap his companions, and blew them up into monumental crimes in the eyes of the world. He who turns the world upside down, places the deceitful on the throne, casts the truthful down – because such is a being of base earth, he will never stand as equal among the uplifted.”

My co-occupants of the High Table, in side remarks, and those who came up from the audience afterwards to volunteer their answer to the riddle, without exception named one individual and one individual only, even as I remained non-committal. Indeed, one or two tried to put up a defence of that nominee, and I had to remind them that I had named no one! Fagunwa wrote largely of the world of mongrelized creatures but, as I remarked, his fiction remains a prescient and cautionary mirror of the society we inhabit, where beasts of the forest appear to have a greater moral integrity than those who claim to be leading lights of society.

In this season of goodwill, we owe a duty to our immediate and distant neighbours: CAVEAT EMPTOR! Let all beware, who try to buy a Rolex from this indefatigable watch peddler. His own hand-crafted, uniquely personalized timepiece has been temporarily confiscated by NDLEA and other guardians of public health but, there is no cause for despair. Such has been the fate of the misunderstood and the envied, avatars descended from the heavens before their time, the seers, and all who crave recognition. Our author invokes God tirelessly, without provocation, without necessity and without justification, perhaps preemptively, but does he really believe in such an entity? Does our home-bred Double-O-Seven believe in anything outside his own Omnipotency? Could he possibly have mistaken the Christian exhortation – ‘Watch and Pray’ for his private inclination to “Watch and Prey? This is a seasoned predator on others’ achievements – he preys on their names, their characters, their motivations, their true lives, preys on gossip and preys on facts, preys on contributions to collective undertakings…..even preys on their identities, substituting his own where possible. Well, hopefully he may actually believe in the inevitable End to all vanities? So, let our Great Immortal, the Unparalleled Achiever, Divinely appointed Watchman even on the world that is yet to come remember Fagunwa’s Iku, the ultimate predator whose visitation comes to us all, sooner or later.

Chei! There is Death o!