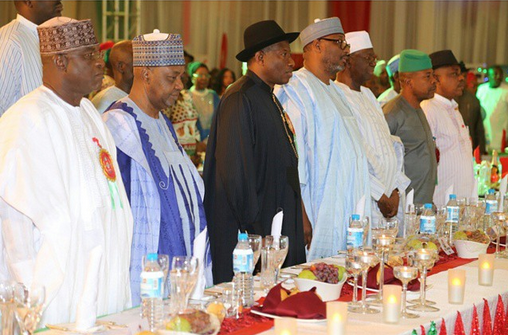 As Nigerians continue to debate the legal and moral implications of the huge amount of funds donated towards President Goodluck Jonathan’s 2015 electioneering campaign, the Independent National Electoral Commission, INEC, has said that only security agencies can investigate any party, individual or company that violates any part of the country’s Electoral Act.

The commission, which however admitted that it had the power to prosecute violators of the Act, explained that before it could do so, concrete evidence must be presented before it.

At a fundraising dinner organized by the Peoples Democratic Party, PDP, for its 2015 presidential candidate – Goodluck Jonathan – at the Banquet Hall of the Presidential Villa, Abuja on Saturday, state governors, individuals, corporate bodies and political groups raised over N21.27 billion on the night with prominent lawyers, the opposition All Progressives Congress, APC, and cross-section of Nigerians calling for the prosecution of the donors. They argued that aside the moral burden placed on the president by the donors, they (donors) also violated the Electoral Act by exceeding the stipulated limit.

Likewise, sub-section 10 of the same section adds that a presidential candidate “who knowingly acts in contravention of this section commits an offence and on conviction is liable to a maximum fine of N1m or imprisonment for a term of 12 months or both”.

Furthermore, Section 91(2) of the same Act states, “The maximum election expenses to be incurred by a candidate at a presidential election shall be N1bn”.

In response to an enquiry by The PUNCH on whether INEC would investigate and prosecute the donors, the commission’s Director of Voter Education and Publicity, Mr. Oluwole Osaze-Uzzi, stated that, “Before you prosecute, won’t you investigate? Before you prosecute somebody, the person has to be investigated. If a person shoots another man on the street, the police cannot just charge him to court. They will have to follow a process.

“It is after investigation that we can prosecute. And there must be an evidence that a crime has been committed”.

When asked if the commission had contacted any of the security agencies over the issue, his terse response was: “I can’t say yes or no as of now”.