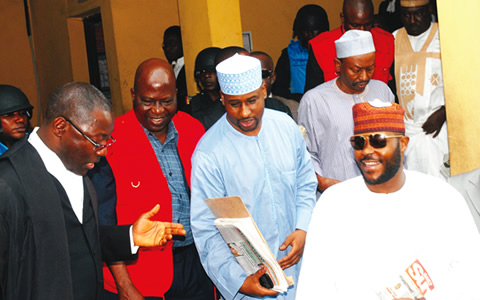 The accused persons allegedly colluded among themselves and obtained N3,121,393,098 (Three Billion, One Hundred and Twenty One Million, Three Hundred and Ninety Three Thousand, Ninety Eight Naira Only) from the Federal Government under the guise that the money was for the importation of Premium Motor Spirit (PMS).

One of the charges read that: “You  Mahmud Tukur, Ochonogor Alex, Abdullahi Alao, Eterna Plc, Axenergy, and Star Inspection Services Nigeria Limited between October and November, 2011 within the jurisdiction of this honorable court with intent to defraud, conspired among yourselves to commit an offence to wit, obtaining the sum of N1,222,154,152 (One Billion, Two Hundred and Twenty Two Million, One Hundred and Fifty Four Thousand, One Hundred and Fifty Two Naira Only) by false pretense , from the Federal Government of Nigeria purporting the said sum to be subsidy fund by falsely claiming to have imported 13, 701, 569 litres of premium Motor Spirit into Nigeria through the mother vessel MT Valle Di Castiglia and the Daughter vessel MT Deepwater and thereby committed an offence contrary to section 1(3) of Advance Fee Fraud and Other Fraud Related offences Act 2006”.

The accused persons pleaded not guilty when the charges were read to them.

Justice Akapo allowed the accused persons to continue to enjoy the terms of bail earlier granted them by court and adjourned the matter to March 2, 3 and 4, 2015 for commencement of trial.