The continuous fall in the price of crude oil in the international market and the recent devaluation of the nation’s currency, the naira, are putting serious pressure on the economy, with the currency experiencing a free fall. 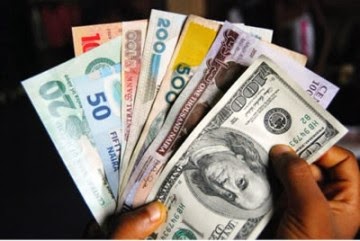 The naira exchanged for between 192 and 194 to the United States dollar at the parallel or street market on Friday. Earlier in the week, it sold for N188 against the dollar at the same market.

Our correspondents similarly gathered that the pound and euro sold for between N294 and N296, and N236 to N238, respectively on the streets of Lagos on Friday.

The continued fall in crude oil price had forced the Central Bank of Nigeria to use a huge chunk of the nation’s external reserves to defend the naira.

The persistent depreciation of the naira, however, forced the CBN to on November 25 devalue the currency against the dollar by eight per cent from N155 to N168.

The central bank thus expected the naira to sell against the dollar for between N160 and N176.

However, the naira has been selling outside the CBN target band at the interbank forex market (where the banks sell to themselves and their customers), a situation that has fuelled speculation among analysts that the bank may be forced to devalue the currency soon again.

As of Friday, the naira closed against the dollar at N184.50 at the interbank market.

The continued fall in the value of the naira forced the CBN to on Thursday introduce new rules aimed at halting the slide. It barred banks from holding any amount of their funds in dollars.

It also directed the banks and members of the public who buy dollars from it to use them within 48 hours or return the unspent funds.

The implications of the fall in the value of the naira include the fact that manufacturers will have to spend more naira to buy foreign currencies with which they will import raw materials as well as purchase machineries and spare parts.

For Nigerian parents who send their children to schools abroad, paying for tuition in foreign currencies and sending upkeep money to their children will not come easy.

Analysts said the recent policy measures introduced into the forex market by the CBN had made many Nigerians, including importers who need dollars and other foreign currencies, to take to the parallel market.

According to them, parents who want to pay their children’s tuition overseas and importers will have to get their forex in the street rather than wait endlessly at the interbank market.

In a circular on November 6, the central bank said it would no longer sell dollars to importers of electronics, finished products, information technology equipment, generators, telecommunications equipment and invisible transactions at its Retail Dutch Auction System forex market.

School fees fall in the category of invisible transactions.

The Acting National President, Association of Bureau De Change Operators of Nigeria, Alhaji Aminu Gwadabe, predicted on Friday that in the next one week, the dollar would likely sell for N200 to a dollar at the parallel market.

Aminu and other analysts, who spoke with our correspondents, linked the development to the continued fall in the prices of crude oil in the international market and recent developments in the nation’s financial regulatory environment.

The national currency has fallen by over 10 per cent against the dollar at the interbank forex market since the crude oil prices started tumbling in June.

Brent crude oil, which sold for over $110 per barrel in June, had fallen by over 40 per cent so far. As of Friday, it sold for $60 per barrel. The development has reduced the nation’s capacity to earn more foreign exchange to defend the naira.

Nigeria, which is Africa’s largest oil producer, receives 70 per cent of government revenue and 90 per cent of all foreign exchange earnings from oil.

Analysts have, however, criticised the directive, saying it would be counterproductive. They said the naira would keep falling because the CBN did not have adequate forex to defend the naira as a result of the falling crude oil prices.

With the recent tightening of the conditions that allow access to dollar by the CBN, experts expressed concern that it would increase the pressure on the cost of locally manufactured and imported goods, among others, as naira looks set to depreciate further.

A financial analyst at Ecobank, Mr. Olukunle Ezun, said the real impact of the CBN’sThursday circular would be far-reaching.

He said, “Looking at the fact that the Nigerian economy is mostly import dependent, if the naira is allowed to depreciate significantly, the impact is going to be on the goods being imported.

“I think the impact is quite huge on all imported goods, and if care is not taken, it can actually impact the inflation outlook. By and large, the cost of goods will go up and it can impact on the employment rate. We may start seeing downsizing or downgrading. The impact is going to be huge and that is why I believe the CBN will not allow the naira to weaken further.”

Prof. Sheriffadeen Tella of the Department of Economics, Olabisi Onabanjo University, Ago-Iwoye, Ogun State, said there had been shortage of foreign exchange as a result of falling oil revenue amid the decline in prices, which were affecting the naira.

Tella said, “What the CBN should be doing is to find a way of reducing the pressure on the naira by making sure that importation is highly reduced. But the policy of the CBN alone can’t do the magic, it has to be with the support of the fiscal sector. The Ministry of Finance should make a policy to reduce importation and ensure that whatever is exported, the money should be repatriated on time.

“More importantly, the central bank should ensure that money being made by government agencies is domiciled within the CBN. A situation where other agencies like the NNPC are also acting as bankers to the Federal Government is not tidy. At this point, there must be serious control of the inflow and outflow of foreign currencies by the CBN.”

He said the depreciation of the naira had already increased the cost of production in the manufacturing sector as most of the raw materials being used were imported.

Tella said the increase in the cost of production would affect the prices of goods, adding that “cost of production will continue to increase if the naira deteriorates further. Even the producers will have to cut their level of production, which of course implies that we are going to be in a serious problem in terms of employment generation.”

The Director-General, Lagos Chamber of Commerce and Industry, Mr. Muda Yusuf, said any offshore obligations, including payment of school fees of students outside the country, servicing foreign debts and going for vacation would be difficult at this period.

“The depreciation of the currency is already putting upward pressure on the cost of production and services because quite a lot of activities that take place here are dependent on imports. It will lead to a reduction in companies’ profit margins and some companies may be forced to downsize. We are also likely going to see inflation,” he said.

A report by Ecobank Research on Thursday stated, “Tightening the conditions that allow access to dollar while making no changes to how foreign exchange is supplied will further heighten the naira volatility with further depreciation most likely; as such, we expected the naira to trade between 190 and 195 to the dollar month-end December 2014.

“While the CBN’s reason for the circular is to maintain the stability of the naira, it is not clear how it intends to achieve this objective, given following recent sharp fall in Brent oil prices and uncertainty over the normalisation of the US monetary policy following the end of QE III in October.

“Overall, the circular will create more volatility that will require another set of CBN circulars to address the dollar supply and demand bottlenecks. As such, the CBN might need to continue to intervene in the interbank FX market.”