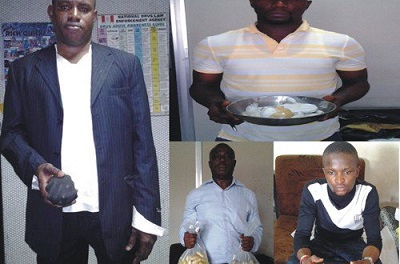 Four suspected drug traffickers between the ages of 24 and 44 have been arrested by officials of the National Drug Law Enforcement Agency (NDLEA) at the Murtala Mohammed International Airport (MMIA) in Ikeja, Lagos.

The suspects are: Omidiya Taiwo (44), who works at a foreign automobile company; Anikwe Chukwudi Charles (25), a hotel attendant in Lagos; Igwe Nelson Chidi (24), a student, and Agomuo Ekwutosi Basil (44), an Imo State-based farmer. About 6.135 kilogrammes of illicit substances were seized from them.

The NDLEA Lagos Airport Commander, Mr. Hamza Umar gave the breakdown of the seized drugs as 4.290 kilogrammes of heroin; 570 grammes of methamphetamine and 1.275 kilogrammes of cocaine.

“Omidiya Taiwo was found in possession of 525 grammes of cocaine and 1.540 kilogrammes of heroin. He ingested 87 wraps and concealed others in his pants on his way to Spain. Anikwe Chukwudi Charles was intercepted with 570 grammes of methamphetamine concealed in the handles of his luggage on his way to Malaysia. Igwe Nelson Chidi was found with 750 grammes of cocaine hidden under his luggage and Agomuo Ekwutosi Basil was caught with 2.750 kilogrammes of heroin hidden inside his luggage while returning from Pakistan. They are cooperating with our team of investigators and will be charged to court soon”, Umar said.

Taiwo, who works in Spain, said he was introduced into drug trafficking by a friend. “I have been living in Spain for the past 14 years where I work with an automobile company. My friend in Barcelona called me and requested that I should bring drugs to Spain. He even contacted somebody who gave me the drugs in Lagos. After swallowing 87 wraps, I hid the remaining in my pants because the wraps were many. I was sad when the drug was detected at the airport because I would have made a fortune from it”, Omidiya, who hails from Ogun State, said.

Charles said he was on his way to Malaysia for studies when he was caught with the drugs. “I was working as a hotel attendant in Lagos when a customer asked me if I am a graduate. I told him that I have five credits but could not go further in my education because of lack of finance. He promised to help me and he used to give me money any time he came around. He called me that he had completed my admission for further studies in Malaysia. That was how he paid my travel expenses and gave me a bag to take to Malaysia. He said his friend would collect the bag from me and assist me secure my admission. Unfortunately, drug was found inside the handle of the bag he gave me”.

Chidi, who hails from Imo State, said: “I got admission two months ago to study Tourism and Hotel Management in Cyprus. While in Nigeria, a friend in Cyprus called me to bring narcotics for a fee of E5,000. That was how I got involved in drug trafficking. I wanted to use the money to settle my fees and buy books for my study. This is a big setback for my career”.

“I am a farmer in Imo State. It was difficult for me to feed my wife with one child because of hardship. A friend invited me to Pakistan and promised to sponsor my trip and help me secure a good job. When I got to Pakistan, he told me there was no job but that I should take drugs to Nigeria. He promised to give me N500, 000 to start up my business if I succeeded in taking the drugs to Nigeria. Since life was becoming unbearable, I decided to take the risk. I was, however, not lucky as I was arrested at the airport in Lagos”, said Basil, in his confessional statement.

Chairman/Chief Executive of NDLEA, Ahmadu Giade, reiterated his warning to drug trafficking syndicates that the agency would continue to intercept narcotics, arrest traffickers and prosecute them.

“We have put in place measures to intercept narcotics this end-of-year season. Drug traffickers planning to smuggle drugs through the country shall be apprehended and prosecuted. I am happy with the arrests, particularly that of 25-year-old Anikwe Chukwudi Charles, a hotel attendant, who was taking drugs to Malaysia where drug trafficking attracts capital punishment”, he said.