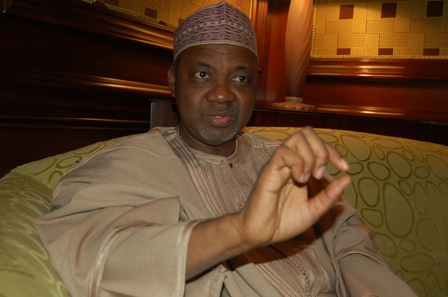 Vice President Namadi Sambo has assured President Goodluck Jonathan that he would deliver over two million votes to him in Kaduna, his home state, in the 2015 presidential election. This was contained in a statement by the VP’s media aide, Umar Sani, on Monday.

According to the statement, Sambo gave the assurance while speaking during a meeting of the Kaduna chapter of the Peoples Democratic Party, PDP, held at the General Hassan Usman Katsina House, Kawo, Kaduna.

The statement quoted the vice president as saying that he would deliver the votes due to the “overwhelming support the PDP enjoys in the state”.

Sambo also boasted that all PDP candidates contesting for various positions in the state would emerge victorious come 2015.

“It is only PDP today in Nigeria that has its presence in the state, local government, ward and polling unit level. This representation is full and strong all over the federation”, the statement quoted the Vice President.

Sambo added: “We believe that there are no losers, no winners and no vanquished and everybody will be carried along. Everyone of our party member that participated in our primary agrees that it is only one person that can be a winner and they have agreed to cooperate and work together”.

Meanwhile, Sambo on Monday collected his Permanent Voter Card with a call to Nigerians to conduct themselves peacefully during and after the 2015 elections.

He collected his PVC at the INEC Distribution Centre located at the Kaduna North Local Government Secretariat, Magajin Gari, Kaduna.

The vice president was accompanied to the INEC office by the Kaduna State Governor, Alhaji Ramalan Yero, and they were received by the State INEC Resident Electoral Commissioner, Alhaji Haliru Aliyu Tambuwal.