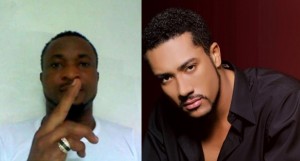 Ok, this is really funny. I mean he doesn’t even look like Majid Michel in anyway.

Sha, a young Nigerian man identified as Kelvin Ogodogu who is based in Ghana, has been jailed 10 months with hard labor for impersonating Ghanaian actor, Majid Michel.

According to reports, Kelvin, who was arrested on Saturday, November 15, 2014 through the help of some of his neighbors in Kasoa, Ghana, was apprehended for trying to defraud a US-based Nigerian lady by soliciting funds to bury his mum.

Kelvin Ogodogu is reported to have been arraigned twice in the Ledzokuku Krowor Municipal Assembly’s Magistrates’ Court in Teshie, Accra and was sentenced on Friday, November 28, 2014 to 10 months imprisonment with hard labor at the Nsawam Maximum security Prison, Ghana.