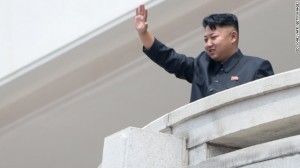 A top North Korean defense committee has threatened attacks on the Pentagon, “the White House and the whole U.S. mainland” if President Barack Obama retaliates over last month’s cyberattack on Sony Pictures, according to a statement posted to the country’s official Korean Central News Agency. The Huffington Post has more:

“The army and people of the DPRK [Democratic People’s Republic of Korea] are fully ready to stand in confrontation with the U.S. in all war spaces including cyber warfare space to blow up those citadels,” said the statement, which was attributed to North Korea’s top policymaking institution, the National Defense Commission. The statement did not provide further details of the threatened attacks. Pyongyang has along history of issuing ominous warnings to other nations.

The statement said that President Obama is ‘recklessly’ spreading rumors about North Korea’s involvement in the recent cyberattack on Sony Pictures.

North Korean officials on Friday denied having a part in the Sony hack after the U.S. Federal Bureau of Investigation released a statement concluding that “the North Korean government is responsible for these actions.” Obama said he was considering a proportionate response, including adding North Korea back to the United States’ list of state sponsors of terrorism.