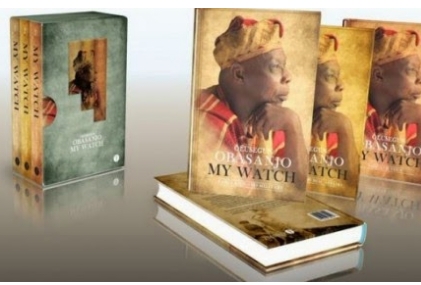 Former President Olusegun Obasanjo has appealed the ruling by Justice Valentine Ashi of the Federal Capital Territory High Court ordering security agents, including the police and operatives of the Department of State Service, to confiscate his latest autobiography, ‘My Watch’.

The judge gave the order after Mr. Obasanjo went ahead with the public presentation of the controversial book on Tuesday in Lagos, disobeying the court’s restraining injunction.

However, the ex-president noted that he was in no way “daring the court” as widely reported by some national dailies, describing such publication as misleading.

In the appeal with Suit No. CV/472/14, filed in a Federal High Court, Abuja, a copy which was made available to journalists in Abeokuta, the former president’s counsel contended that Obasanjo was dissatisfied with the ruling of the High Court and “appeal against the said ruling upon the ground set forth…”

Among the 10 grounds of appeal, the counsel averred, among others that:   “The learned Trial Judge erred in law when he granted Interlocutory Orders of Injunction which inter alia restrained the Defendant from the publication of his book “My Watch” or the content of the letter to the President which is the subject of the suit before the trial judge in the said book.

“There was uncontradicted affidavit evidence that the defendant’s book ‘My Watch’ had been published and released to the public before the making of the Interlocutory Order.

“The Plaintiff never alluded to this fact in his affidavit before the court.  It is settled law that an Injunction does not lie to restrain a completed act. His Lordship failed and/or neglected to allude to the affidavit evidence before making the Interlocutory Order.

“The learned trial Judge erred in law and exercised its discretion wrongfully in granting the Orders of Interlocutory Injunction subject of this appeal against the defendant restraining him from publishing his book ‘My Watch’ or publishing his letter subject of the suit in the said book”.

Meanwhile, one of the former president’s aides at the Olusegun Obasanjo Presidential Library, Abeokuta, Mr. Vitalise Ortese, on Thursday exonerated his principal from deliberately flouting a court order.

In a statement he signed, Mr. Ortese said since the news of the said order broke, he (Obasanjo) has been receiving calls from concerned friends far and near and he was constrained to make this release and present the facts as they relate to the book and its public presentation.

Ortese said, “Chief Olusegun Obasanjo wishes to state that the media reports which convey the impression that he intended to ‘dare or confront a judge or the judiciary’ is highly misleading.

“Far from this, on the contrary, the former president is a law abiding citizen who will only pursue his rights within the law and will not ‘dare’ a judge or knowingly flout an order of a Court of competent jurisdiction.

“The former President wishes to make it clear that in the first instance, no formal order from Justice Ashi was served and received by either himself or by proxy regarding any injunction restraining the publication of the book, ‘My Watch’ which from the records was already in circulation”.

The statement added that Obasanjo has directed his lawyers to appeal against the orders and seek a suspension or stay of execution of these orders.