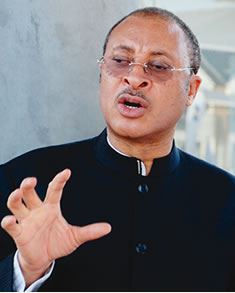 A former presidential aspirant, Prof. Pat Utomi, has said ex-President Olusegun Obasanjo is also guilty of some of his allegations against President Goodluck Jonathan.

Utomi said just like Jonathan, Obasanjo also entertained gossips from those around him.

In a Facebook post on Thursday, titled ‘Obasanjo and the Burden of History, Utomi noted that he was erroneously rumoured to be a member of the Alliance for Democracy during Obasanjo’s administration.

The post read in parts, “Obasanjo’s duty as a statesman is negatively affected by a tradition of lack of charity in dealing with others, which today makes it easy for people who should recognise truth when it comes from him dismiss him as acting in character without charity.

“I had the pleasure of being part, indeed, head of the policy advisory team that worked with candidate Obasanjo in 1998. As President, he lapped up all kinds of gossips stemming from my critical views on matters.

“Obasanjo is not wrong in his accusing Jonathan on the quality of people around him for gossiping. The irony is he is guilty of same.”

The foremost economist pointed out that only a few men in Nigeria had been given easy passage to immortality by circumstances as Obasanjo.

Utomi, added that, “His lack of charity manages to be a flaw that seems determined to consign him to a sad footnote in history.

“Still, this does not mean his voice should be ignored. In his moments, he speaks great truth to power and he understands Nigeria better than most. He should not be ignored.”