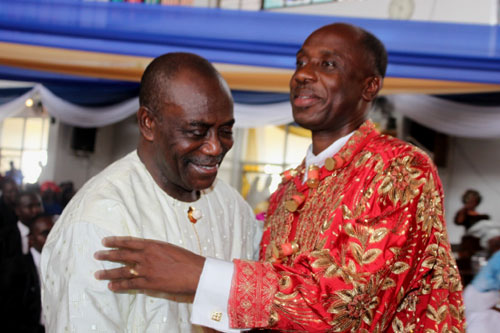 A former governor of Rivers State, Dr. Peter Odili, has expressed regret that he supported Mr. Rotimi Amaechi to become governor of the state in 2007.

The ex-governor accused Amaechi of dismantling the structure of the Peoples Democratic Party, PDP, following his defection to the All Progressives Congress.

He, however, pointed out that the quick intervention of erstwhile Minister of State for Education and PDP governorship candidate in Rivers State, Chief Nyesom Wike, saved the party from going extinct.

Speaking at the weekend during Wike’s campaign tour in Ndoni Local Government Area, Odili said Amaechi worked against the PDP structures put in place by the founding fathers of the party.

He further pointed out that the PDP in the past, supported Amaechi’s political career with good intentions, adding that he and the PDP had learnt their lessons and were ready to prevent a recurrence of such mistake in 2015.

It was the first time the former governor would be making a public pronouncement on the frosty relationship between him and the incumbent governor, who was the Speaker of the state House of Assembly for eight years when he (Odili) was the governor.

He said, “We thought we did the right thing by supporting Amaechi to become the governor of the state. We left a united state; we also left a united party; PDP was one, Rivers State was PDP.

“There was no other party in Rivers State other than the PDP. Whatever the party hierarchy said would happen happened. The secretary is here to support what I am telling you here today.

“With all the best intentions, we supported his political career and ambition. We thought we did what was best for the state. As you know, until a man has power and has money, you don’t really know him.

“One thing is clear; we have accepted our mistake and we are determined to correct it in 2015. Who would have thought that a governor, who won an election on the platform of the PDP would defect with the mandate of the party to another party?