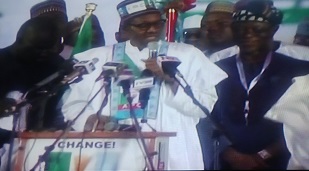 In what looks like a sarcastic statement, the Special Assistant on New Media to President Goodluck Jonathan, Reno Omokri, has congratulated the presidential candidate of the All Progressives Congress, APC, in the forthcoming general election, Gen. Muhammadu Buhari (retd), wishing him ‘goodluck’.

Omokri, who took to his Twitter handle, @renoomokri to congratulate Buhari, who won the APC presidential primaries earlier on Thursday by polling 3, 430 votes, said with his (Buhari) emergence as the main opposition party’s flag bearer, 2015 is ‘the year of Goodluck’ in apparent reference to victory for Mr. Jonathan in the polls.

President Jonathan’s adoption as the sole candidate of the PDP was ratified at the party’s convention on Wednesday, which means the 2015 presidential poll will be a straight contest between him and Mr. Buhari.

In his tweets, Omokri said “I wish Muhammadu Buhari, who has just emerged the candidate of the APC, #Goodluck in all his endeavors. Retweet to join my congratulations!

“Today’s events just reinforced the fact that 2015 is #TheYearofGoodluck! Retweet if you know this is true”. 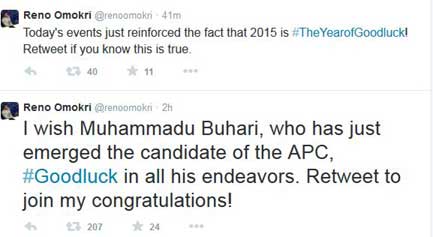