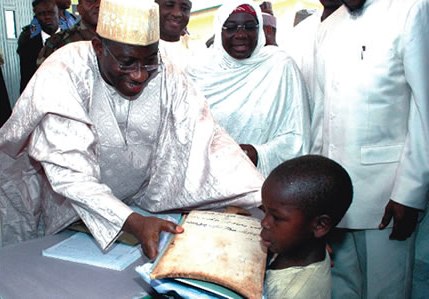 The Peoples Democratic Party, PDP, has said it is proud of its numerous achievements in the education sector, particularly the record performance of President Goodluck Jonathan in the sector in the last four years.

The party, which reviewed the gains and challenges of the sector against the performance of the present administration, urged Nigerians to vote for President Jonathan in the 2015 presidential election to guarantee the future of education in the country.

PDP National Publicity Secretary, Olisa Metuh, in a statement on Monday said the PDP has in the last 15 years, progressively grown the education sector as a social instrument for national development and integration through vigorous implementation of broad-based policies in keeping with its manifesto and ideology.

The PDP saluted the President for accelerating the development of education at all levels in the last four years, noting, that “President Jonathan has not only repositioned the public school system but has also provided the enabling environment for greater participation of private individuals and agencies in the delivery of education services under government regulation.

“This is in addition to the massive rehabilitation and upgrade of federal government-owned schools as well as the three-pronged programmes of the Almajiri Education System, the first of its kind; the Girl-Child Education and Back-to-School programmes, all of which have drastically reduced the out-of-school children profile in the country, particularly in the north.

“The 150 Almajiri schools across the Northern states and the Out-of-School-Children Programme including Specialised Boys and Girls Schools across the country have given meaning to the lives of hitherto despaired children.

“To guarantee enhanced access to university education, President Jonathan established 14 new universities, (9 in the northern states of Kogi, Taraba, Jigawa, Gombe, Nasarawa, Katsina, Yobe, Kebbi and Zamfara States and 3 in the southern states of Ebonyi, Bayelsa and Ekiti) including two specialized Police and Maritime universities, thereby ensuring that all states of the federation and the Federal Capital Territory have a federal university.

“Of course, the number of private primary, secondary and tertiary institutions has also doubled as a result of the education-friendly environment created by the PDP-led Federal Government. This is in addition to the establishment of new NCE awarding institutions and upgrade of strategic polytechnics for enhanced service delivery in the country.

“Again, in line with its commitment to the proper funding of the sector, the Federal Government has almost tripled education allocation from N224 billion in 2007 to N634 billion in 2013.

“This has been complemented with the creation of special intervention agencies such as TETFund and the special NEEDS assessment fund through which over N500 billion has been spent on various projects to increase access and improve the quality of infrastructure at the tertiary level of our education system.

“To guarantee quality education, the Jonathan administration has also sponsored over 5, 867 lecturers of federal and state tertiary institutions for post-graduate studies, out of which 1,375 were sponsored overseas.

“School curriculum was also reviewed in line with national development objectives while public-private partnership was strengthened with major publishers for the development of basic and senior secondary school textbooks”.

Stating that President Jonathan’s performance in the sector cuts across the entire spectrum of education in the country, the PDP said the record of achievements would not have been possible if not for the meticulous implementation of policies by the administration and the support of
well-meaning Nigerians.

The PDP therefore charged Nigerians to continue to support President Jonathan and ensure that the gains already recorded in the sector are consolidated by voting en-masse for the PDP in the 2015 general elections.