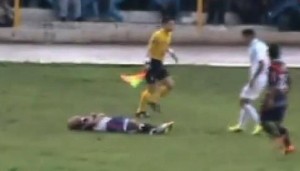 Cameras were rolling the moment a football player in Peru was struck by lightning in right in the middle of a match. The Huffington post has more:

Joao Contreras Fuentes, a 21-year-old player for Sport Aguila, a Peruvian soccer club, was on the field Tuesday during a semifinal match of the Copa Peru soccer tournament when the lightning bolt hit, the BBC reports.

In terrifying footage from the incident, the lightning bolt appears so quickly that only a puff of smoke is seen around Fuentes as the young man collapses to the ground. The U.K.’s Daily Mirror reports that the lightning strike also injured a nearby assistant referee, who can be seen in the footage getting up and staggering around before sinking back to the ground.

Fortunately, despite initial reports that Fuentes had died after the lightning strike, the Sport Aguila player is very much alive.

“It’s a miracle that I survived the impact from a lightning strike,” Fuentes told Peruvian newspaper Diaro Correo this week. “The doctors told me that I’ve had a lot of luck.” According to the BBC, both Fuentes and the assistant referee are in the hospital, recovering from their injuries.