A mechanic, Olajide Olaniran, has stabbed a man, Julius Joseph, for allegedly pinging on the road while driving in the Ijaiye area of Lagos State. 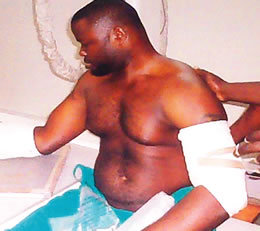 According to Punch, Joseph was said to be returning from a bank in the area to withdraw money when Olaniran, who was in a Toyota Corolla, blocked the road and accused him of pinging and driving. Though it was later revealed that Joseph was checking an alert he received on his phone when the incident occurred.

However,34-year-old Joseph challenged the 42-year-old mechanic, Olaniran for driving against the traffic and both men were said to have alighted from their cars to sort the issue the ‘Nigerian way’.

The ‘sorting’ got messy and mechanic Olaniyan, who is a native of Ibadan, Oyo State, allegedly used a bottle to stab Joseph. He also made away with Joseph’s two phones and N5,000. Joseph after losing much blood reportedly slumped at the spot. He was later rushed to the Lagos State University Teaching Hospital, Ikeja, and was later referred to the National Orthopaedic Hospital, Igbobi for intensive care.

Punch reports that the suspect was however apprehended after the incident was reported at the Meiran Police Station. A prosecutor, Lugard Ahonle, subsequently brought him before an Ikeja Magistrate’s Court sitting in Ijaiye on five counts bordering on assault and stealing.