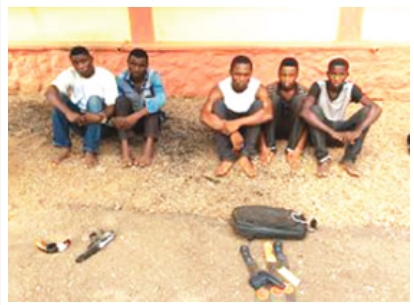 A 26-year-old man identified as Emmanuel Olowu who was recently arrested at the Redemption Camp of the Redeemed Christian Church of God while trying to rob worshipers was paraded alongside other suspected armed robbers by the Ogun state Police command at the Force Head quarters in Abeokuta, yesterday December 18th.

Parading the suspects before newsmen, the state’s Police Public Relations Officer, Muyiwa Adejobi, said Emmanuel was apprehended with a toy gun, phones and money. Adejobi said the other suspects were arrested while carrying out robbery attacks in some towns in the state.