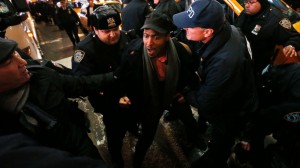 Thousands of diverse people united by anger took to the streets from New York City to San Francisco for a second time to protest a grand jury clearing a white police officer in the chokehold death of an unarmed black man. AP reports:

Grandparents marched with their grandchildren. Experienced activists stood alongside newcomers, and protesters of all colors chanted slogans.

“We’re under siege and it has to stop,” Harlem resident Judy Edwards said at a rally Thursday night in lower Manhattan’s Foley Square.

The 61-year-old black woman was accompanied by her daughter and twin 10-year-old grandchildren, a boy and a girl. She said it was important to her that the children saw a crowd that was racially mixed and diverse in many other ways all insisting upon the same thing — that something must be done.

That was the message, too, in cities across America: Atlanta, Boston, Chicago, Denver, Detroit, Minneapolis Oakland, San Francisco and Washington, D.C., among them. Sign-carrying, chanting demonstrators marched down heavily-traveled streets and shut down highways and bridges. Politicians talked about the need for better police training, body cameras and changes in the grand jury process to restore faith in the legal system.