As Nigerians continue to prepare for the New Year Celebrations, the Inspector-General of Police, Suleiman Abba, has advised worshippers on how to prevent terror attacks at worship centres.

According to a statement released on Wednesday, December, 31, 2014, by the Force Public Relations Officer, Emmanuel Ojukwu, the police boss urged Christians and Muslims in the country as they attend Jummat and Church services tonight to reduce the number of vehicles around their worship centres.

Due to the security challenges in the country, the police boss equally advised operators of motor parks, shopping malls and recreation centres to work very closely with the police and other security agencies as they strive to strengthen security in their respective facilities. 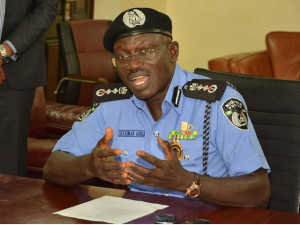 The Inspector-General of Police informed that he had directed all Zonal AIGs and State Command Commissioners of Police to ensure an efficient deployment of all operational manpower and tools at the disposal of their respective Commands.

The statement further stated that Abba has also directed the AIG Border Patrol to ensure that the nation’s borders are effectively manned to prevent any cross-border crime.

It added that the AIG Air Wing has been directed to provide aerial patrol at the Federal Capital Territory and other States.

“The Inspector-General of Police, while wishing all Nigerians a very blissful and peaceful New Year celebration, assures Nigerians of the Nigeria Police Force readiness and commitment towards ensuring a free and fair 2015 general elections.

“While saluting the courage and gallantry of officers and men of the Force for their tireless services in protecting lives and property during the year, the IG charges Police personnel to continue to be civil in the discharge of their constitutional responsibilities. He, however, warns that officers found acting contrary to the Force’s vision and mission will be appropriately sanctioned,” the statement read in parts.