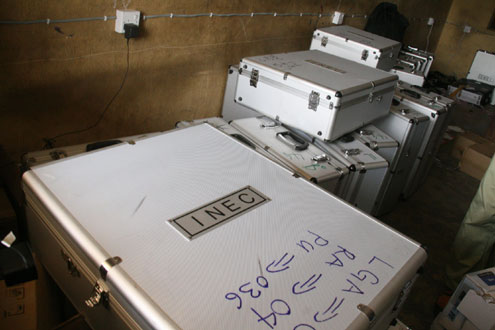 It was learnt that the suspects arrested on Thursday night, in a hotel in Elele, Ikwerre Local Government Area of the state.

Confirming the development, the state police spokesman, Ahmad Muhammad, a Deputy Superintendent of Police (DSP), said nine persons were arrested in a hotel.

According to him, the suspects confessed to being internet fraudsters.

He said: “Following a tip-off that some persons with questionable characters were seen entering a hotel at Elele with concealed items in a carton, the police immediately raided the hotel and arrested nine suspected youths, who admitted that they were a syndicate of internet scammers trying to break into a code.

“Meanwhile, investigation has commenced to confirm the veracity of their claims”, the police said.

The state Resident Electoral Commissioner, Mr. Aniedi Ikowaik, told journalists that they were yet to clarify the issue.

He, however, pointed out that the commission’s machines were in the field as at yesterday for the continuous voters registration exercise, adding that findings cconducted did not show where the said machines were used.