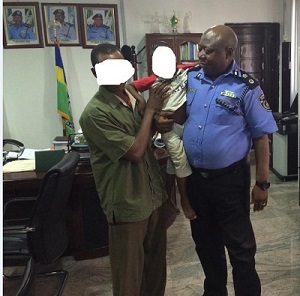 The Rivers State Police Command has announced the safe rescue of a three-year old male child from kidnapper’s den.

The child, who was kidnapped last week Monday, was rescued yesterday at about 04:30AM, when a crack team of police detectives traced and stormed the kidnappers’ hideout at Rumuodogu II, in Port Harcourt, the state capital.

The child has since been handed over to the father.

The duo’s arrest later led to the arrest of their accomplice, Ibezin Isih at another location.

“The idea of kidnapping the little victim was conceived and initiated by Ogele Akiyo, who is a co-tenants with the victim’s parents in same compound while Ben Elenwo, who posed as the child school teacher, executed the kidnapping.

“The safely rescued child has since been handed over to his father personally by CP. Dan Bature in his office”, Muhammad, a Deputy Superintendent of Police of said.

He reiterated the Command’s resolve to fight crime even as he reassured people of the state of the police’s readiness of sustained instant response to tip offs and prompt response to distress calls.