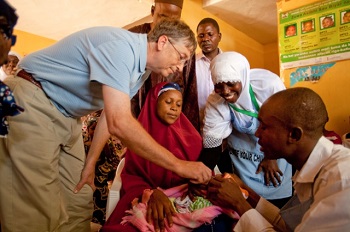 The world’s richest man and philanthropist, Bill Gates, has commended the Goodluck Jonathan administration for recording significant success in its fight against the endemic polio virus disease.

The co-chair of the Bill & Melinda Gates Foundation, took to his official twitter handle, @BillGates, to celebrate the success, noting that the success story recorded by Nigeria in the fight against polio is one of his favourite stories of the year.

His tweet, which was accompanied with an infogram and a short link to his personal blog, reads, “One of my favourite stories of 2014: In just one year, Nigeria went from 50 polio cases to 6…” 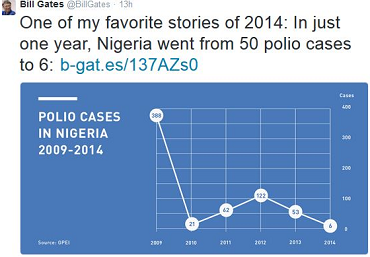 Commenting further on his personal note of “Good news you may have missed in 2014”, Gates, who is the co-founder of Microsoft Corp., stressed that “Nigeria had a pretty good year”, projecting that the country will be polio-free in no distant time.

He also noted that the infrastructure Nigeria has built to fight polio actually made it easier for the country to contain the dreaded Ebola virus disease (EVD).

“A lot of the media coverage about Nigeria this year focused on two things: Ebola and terrorism. Both are frightening, and they masked the fact that from a global health perspective, Nigeria actually had a pretty good year. Although it’s one of only three countries that have never been free from polio (Pakistan and Afghanistan are the other two), I don’t think it will be on that list for long. Nigeria has reported only six cases of polio this year, compared to more than 50 last year. What’s more, the infrastructure Nigeria has built to fight polio actually made it easier for them to swiftly contain Ebola. The fact that Nigeria is now Ebola free is a great example of how doing the work to fight things like fighting polio also leaves countries better prepared to deal with outbreaks of other diseases”, he said.

The Bill & Melinda Gates Foundation has a long history of funding polio eradication initiatives in Nigeria.