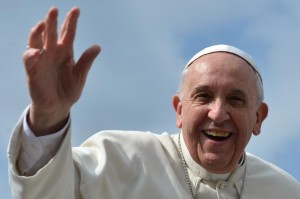 Pope Francis has been quoted saying all dogs go to heaven. His words of comfort to a young boy grieving for his dead dog have given hope to animal lovers seeking a spot in heaven for their dogs. UPI report:

The pontiff spoke to the boy during a recent appearance on St. Peter’s Square in Vatican City and the Roman Catholic leader’s words have been cited by some as a confirmation of a 1989 animated movie’s title: All Dogs Go to Heaven.

“One day, we will see our animals again in the eternity of Christ. Paradise is open to all of God’s creatures,” the pope was quoted as telling the boy.

The statement seems to contradict a 2008 sermon by Francis’ predecessor, Pope Benedict XVI, in which he said the death of an animal means nothing more than “the end of existence on earth.”

Pope John Paul II said in 1990 that animals have souls and are “as near to God as men are.”