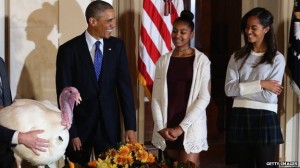 Ms Lauten earlier criticised Sasha and Malia Obama on Facebook following their appearance in short skirts at a Thanksgiving ceremony.

She later took down the post and apologised for her “hurtful words”.

Ms Lauten had also accused the two teenagers of looking bored when they stood with their father at a traditional turkey pardoning event at the White House.

While most commentators reported humorously on what they saw as the uninterested expressions of Malia, 16, and Sasha, 13, throughout the ceremony, Ms Lauten was notably more outspoken.

Her deleted post reads: “Dear Sasha and Malia: I get you’re both in those awful teen years, but you’re a part of the First Family, try showing a little class. At least respect the part you play.