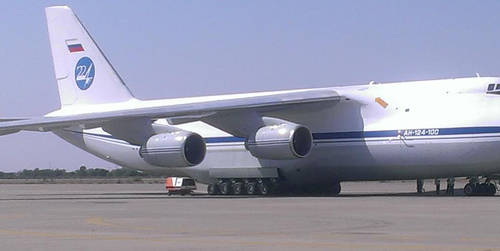 The Russian cargo plane intercepted by Nigeria’s security agencies after it reportedly made an unauthorized landing at the Malam Aminu Kano International Airport, Kano State, was transporting military hardware to Chad, a security source has told Reuters.

The all-French speaking crew of the cargo plane were traveling from Bangui, the capital of Central African Republic, to N’Djamena, the capital of Chad when they made an emergency landing in Kano because the airport in N’Djamena was closed, the report by Reuters said.

An air force spokesman confirmed the plane had been detained but gave no further details.

The spokesman further said after the five crew members were detained, inspectors found two helicopters, a bullet-proof jeep and boxes of what were suspected to be military hardware.

The Russian embassy in Abuja did not immediately respond to a request for comment.

It was not clear what the shipment was for but its interception has fuelled concerns among Nigerians that neighboring Chad might be funding and arming the extremist Boko Haram sect, which has been responsible for the death of over 10, 000 people and forced hundreds of thousands of Nigerians to flee their homes.

The Nigerian Government as of the time of publishing this report, has not officially made a comment on the latest seizure.