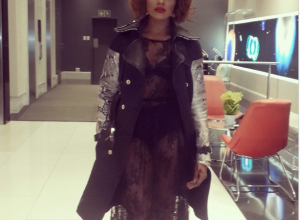 A lot of people were waiting on Seyi Shay’s response and the music star has responded in the classiest way choosing not to exchange words.

I read some things about me today. I think people should focus more on themselves than on others. Maybe he was having a rough day *Hugs*

To his credit, Charles Novia publicly apologized minutes after tweeting his thoughts.