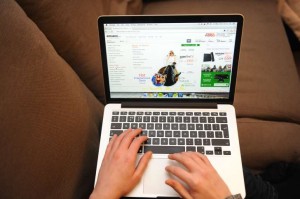 Bargain-hunters spent around £441,000 in a minute to set a ‘Clickmas’ record, racking up an estimated £636million sales. MSN.com reports:

Up to eight per cent of all adults hunted for bargains at some stage during the day. Many then cut short the family festivities to join the queues for the start of today’s High Street sales. Thousands queued through the night for Boxing Day bargains, with some shopping centres opening at 6am.

But that will not ease the rush for internet bargains. It is expected to be even busier online today, with spending predicted to hit £748million – or £515,000 per minute – 29 per cent up on Boxing Day last year.

Retail spending figures suggest millions have delayed buying their presents for friends and family they did not see over Christmas in the hope of finding big bargains.

Numbers visiting the High Street were down this month compared with last year. Even though retailers have slash prices by up to 90 per cent to shift stock, industry analysts fear Boxing Day could see the number of shoppers down by a third.

Retail expert Julie Palmer, of business recovery experts Begbies Traynor, said: ‘After a period of subdued High Street spending in the run up to Christmas, retailers who have underperformed and missed their peak trading targets will be discounting heavily today in a bid to draw in the crowds and make up for lost ground.