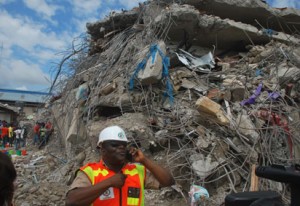 Prophet T.B. Joshua, yesterday, told the Coroner Court investigating the collapse of a guest house within his Synagogue Church Of All Nations (SCOAN) the church that it had to discontinue proceedings until the High Court passes its verdict on the suit filed by the pastor, challenging his invitation before the inquest.

“This court (Coroner) being a lower court to the High Court cannot speculate on the outcome of a higher court. The best legal position is to adjourn this cause of proceeding till outcome of the application before Justice Okunnu. Where a higher court has taken position courts in the lower hierarchy must bow. If the High Court does not agree with us, then we resume at the coroner,” Joshua’s lawyer, Olalekan Ojo, said.

In an application filed before the coroner court, Pastor T.B. Joshua and Synagogue Church are asking the court to suspend proceeding until the determination of the substantive motion for judicial review by the Lagos High Court. Ojo argued that the substantive application before Justice Okunnu is asking for a limited suspension.

According to him, on November 17, 2014, the High Court of Lagos State sitting at the Ikeja Judicial Division presided over by Hon. Justice L.A. Okunnu granted leave to the Applicants in suit No. ID/188/MJR/2014 to apply for a judicial review of the proceedings in the Suit No. CR/AL/101/2014 which is pending before the High Court.

Ojo told the coroner court that in the judicial review before the High Court, the Applicants (Prophet T.B. Joshua and Synagogue church) are praying the High Court to determine whether the statutory jurisdiction of the Coroner’s Court under the Coroner’s System Law 2007 particularly sections 15 and 40 of the Coroner’s Law is limited to conducting inquest into the cause and manner of death and does not extend to inquiry into matters that are not directly causative of the death or deaths being inquired into.

Replying on point of law, a senior State Counsel, Mr Akingbolahan Adeniran, argued that in line with section 40 of the Coroner’s System Law 2007, the major interest is on how a death occurred and there is no definition in Coroner Law that restraints the how.

Coroner judge, Komolafe, however said he would hold off on further actions until the issue on ground is resolved. He adjourned to December 10 for ruling.