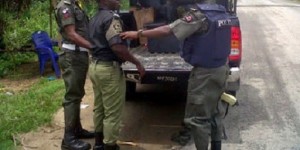 Lol awoof dey purge belle. Three policemen were, yesterday, sentenced to two years imprisonment by Magistrate A. Demi-Ajayi of an Ebute-Metta Magistrate’s Court, sitting at Oyingbo, Lagos, over negligence, which resulted in the stealing of their AK-47.

The convicts are Sergeant Felix Okwa, 47; Corporal Ogu Romanus, 46, and Constable Sunday Okoh, 34. Apart from being jailed for two years, they will also serve a six-month community service after completing their jail term.

The three cops who were attached to Ishashi Police Division of Lagos State Police Command, were said to be on patrol on December 12 at 11.30p.m., when they received a call from an unknown guest, named Kezzy, who invited them for supper at Regional Hotel, also in Ishashi, claiming he wanted to reward them for a job they did for him.

The unknown guest was said to have fed them with food laced with drugs, after which they slept off and their weapons, three AK-47 rifles and 90 live ammunition were stolen.

The hotel manager reported the matter at the Ishashi Police Station after which the unconscious policemen were arrested and later charged to court.

The cops were first arraigned on January 19, 2011, on a two count charge bordering on conspiracy and stealing