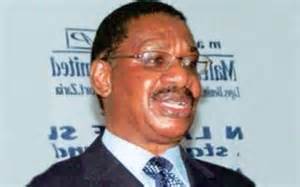 Sagay, who condemned the purported acquisition in a statement on Tuesday, said the Nigerian constitution does not approve of any individual carrying out security duties on Nigerian waters except the country’s armed forces.

We had earlier reported that Tompolo had denied the reports that he bought the decommissioned Norwegian warships and upgraded them with new weaponry, saying it was part of attempts to tarnish his image as well as force him to withdraw his support for President Goodluck Jonathan ahead of the 2015 elections.

However, in his statement yesterday, Sagay said “The news of the recent acquisition by Tompolo’s Company, Global West Vessel Service of seven war vessels, is extremely disturbing and destabilising.  Given the volatile nature of Warri/Benin Rivers Area, and the over bearing violence of the Ijaw against the Itsekiri in particular, this is a sinister and dangerous development.

“There is no provision in Nigerian Law that permits the engagement of private persons and outfits to carry arms and engage in security operations in Nigerian waters.  This duty is the exclusive responsibility of the Nigerian Navy.  Section 3 of the Armed Forces Act, Cap. A 20 of the 2004 Laws of Nigeria provides as follows:

“(3)The Armed Forces shall be charged with the defence of the Federal Republic of Nigeria by land, sea and air and such other duties as the National Assembly may, from time to time, prescribe or direct by an Act”. (4) Notwithstanding the generality of the provisions of subsection (3) of this section –

(a)The Navy shall, in particular, be further charged with – (i) enforcing and assisting in co-ordinating the enforcement of all customs, laws, including anti-bunkering, fishery and immigration laws of Nigeria at sea (ii) enforcing and assisting in co-coordinating the enforcement of national and international maritime laws ascribed or acceded to by Nigeria”.

The constitutional lawyer, therefore, urged the Federal Government and security agencies not to treat the matter with kid gloves, describing the development as a blatant illegality.

“Therefore the present situation in which Mr. Government Ekpemupolo has been allowed to bring in a naval fleet into the Western Delta area of Nigeria constitutes not only a  threat to peace in that area, but also a blatant illegality”, he said.