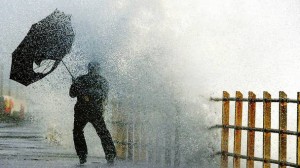 Landslides and flash floods triggered by Tropical Storm Jangmi has left at least 31 people dead and seven others missing in the Philippines, including in areas still recovering from last year’s Typhoon Haiyan, officials said on Tuesday.

Jangmi, packing winds of 65 kilometers (40 miles) per hour and gusts of 80 kph (50 mph), dumped heavy rains Monday on southern Mindanao Island, where floods destroyed bridges and highways, sending thousands of residents to evacuation centers. The storm then pushed its way through eastern and central islands, where most of the deaths occurred Tuesday.

The government weather bureau said that as of late Tuesday afternoon, the eye of the storm was 140 kilometers (87 miles) southwest of central Iloilo City, moving west at 19 kph (12 mph) toward western Palawan Island.

Mayor Stephanie Uy-Tan said 12 people died when a landslide buried two vans and six houses near a mountainside highway in eastern Catbalogan City. She said voices could still be heard from one of the vans and that rescue efforts were ongoing.

Olive Luces, a regional civil defense official, said 11 members of a family died after a creek-side house where they had gathered was washed away by flash floods in central Cebu province. Six other people were missing in the same town.