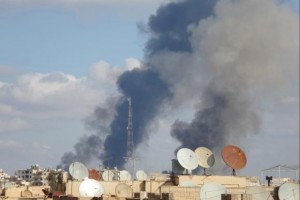 The United States have launched not less than 20 airstrikes against Islamic State (ISIS) militants in recent days, military officials said in a statement on Wednesday. Reuters was there:

Since Monday, U.S. forces conducted seven strikes against the militant group in Syria and led 13 strikes in Iraq with its partner nations, according to the statement from the Combined Joint Task Force for the coalition overseeing the operation.

The strikes, centered in the Syrian border town of Kobani as well as near Sinjar, Qaim, Ramadi, Mosul and Samarra in Iraq, hit numerous Islamic State fighting positions, buildings, vehicles and fighting units, the statement said.