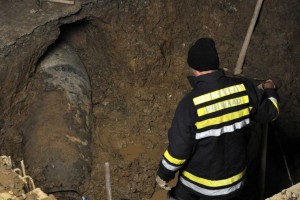 Authorities in a German city have evacuated up to 10,000 people from the area surrounding a building site where an unexploded World War II bomb was found. UPI has more:

The bomb was variously reported as being of U.S. and British origin.

A statement issued by authorities said the bomb had been moved by the builders, so KBD bomb disposal experts were brought in immediately to defuse the explosive.

Meanwhile, about 10,000 people from the surrounding area were evacuated from buildings including the Brandenburg state parliament, a train station and three homes for senior citizens.

Katrin Rautenberg, a spokeswoman for the state parliament, said the incident interrupted debates that have now been pushed back to the January session.