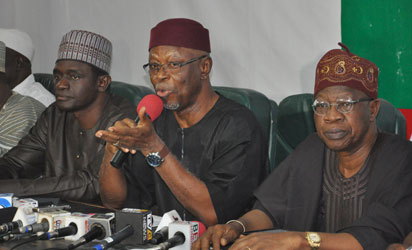 The National Chairman of the All Progressives Congress, APC, Chief John Odigie-Oyegun, has said the party would fight corruption with every resource and vehemence that it could muster, if voted into power come 2015.

Mr. Odigie-Oyegun gave this indication at a media briefing in Abuja on Thursday.

According to him, since independence, Nigeria had experienced varying degrees of corruption to the extent that it had been one of the recurring reasons for change of national leadership.

He noted that in spite of strong public disapproval of corruption, the cancer of corruption had continued to eat deep into the national fabric.

The APC national chairman said in the last 16 years, corruption had grown exponentially to the extent that the world had come to stigmatize Nigeria and Nigerians as synonymous with corruption.

“Our national institutions have been compromised and the continued survival of the country is threatened”, he said.

“The operation of the national budget and the maintenance of the military forces have been so severely compromised by corruption that national development and security have been massively undermined under the Jonathan administration of the last six years.

“Using the corruption perception index {cpi} of Transparency international, Nigeria has maintained a score in the range of 25 percent and ranked amongst the bottom level of corrupt countries deteriorating from a bad score of 27 percent in 2011 to 25 percent in 2013”.

He recounted that following the last public demonstration against the increase in fuel prices in 2012, a probe into the operations of the fuel subsidy regime of the Jonathan administration revealed massive fraud and corruption but no conviction had been secured by this government.

He added that the various reports of investigation of corrupt practices on the national pension scheme, the power sector, the Nigerian National Petroleum Corporation, NNPC, the Central Bank of Nigeria, CBN, government ministries and departments abound “and nothing has been done about them”.

“The (Jonathan) administration has demonstrated, both in its body language and explicit actions, a disgusting lack of will and competence to arrest and reverse the debilitating grip of corruption on our national life”, he said.

“Public officials have developed and sustained chummy relationships with society figures being investigated for corruption and former public officials, convicted for corruption, have been selectively pardoned by the presidency. Some of these persons, following their pardon, have been appointed to high positions of influence by the PDP administration and offered their platform to contest for high public office.

“This is the issue of corruption, an evil that flourished under state – sponsorship and the patronage of the Peoples Democratic Party (PDP). We have a historic opportunity during the forthcoming elections to begin a serious and decisive fight to end this cancer, or submit to its destructive inroads into every facet of our lives”.

Explaining how the APC would tackle the menace if elected, Mr. Odigie-Oyegun, said any officer in the party’s government accused of corruption would be thoroughly investigated and severely sanctioned if found guilty.

“Our government shall lead by example and signal, through its explicit conduct, a zero tolerance for corruption. All APC governments at all levels shall mandatorily operate an open budgetary process with quarterly report of budget performance”, he said.

“The spirit and letter of public procurement laws/processes shall be scrupulously complied with. Our government shall as an article of faith honour all contractual obligations and ensure strict compliance with all court orders/judgments.

“In the international fora, our government shall abide with agreements freely entered into and our foreign missions must honour all contracts so that the image of Nigeria as a corrupt, lawless and undisciplined country will be changed”.

Vowing that the fight against corruption would be thorough and rooted in the belief that all major religions in Nigeria and our culture abhor corruption and impunity, the chairman said an APC-led administration would do so within the rule of law and respect for the fundamental rights of all citizens.

According to him, “We shall fight for change and we must change Nigeria.

“We believe that an environment of poverty and ignorance is a fertile ground for corruption and impunity, consequently, our economic program of inclusive growth, qualitative education and equitable distribution of the national wealth shall constitute a potent weapon in the fight against corruption”.