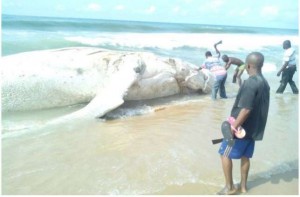 In a stunning report, a very large fish like animal appeared on the shores of a beach in Lagos.

The specie of the fish is unknown but sources present say that the animal is large and white with brownish ridges on it.

The fish seems to have died after being butchered by people who saw it.

Locals in the area seem not to care what and where the animal came from as they have already begun to prepare it for food.