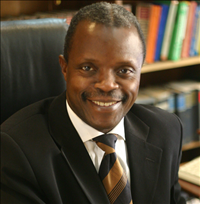 The wait is finally over for watchers of political developments in the All Progressives Congress (APC) as its presidential candidate, Gen. Muhammadu Buhari (retd) has settled for Prof. Yemi Osibanjo (SAN) as his running mate in the 2015 presidential election scheduled for February 14, 2015.

Following two days of deadlocked marathon meetings to select a vice presidential candidate ahead of the December 18, 2014 deadline set by the Independent National Electoral Commission, INEC, for political parties to submit names of their presidential candidates and running mates, the APC national chairman, Chief John Oyegun had on Tuesday told anxious journalists that Gen. Buhari would announce his running mate on Wednesday, a date that coincides with the former head of state’s 72nd birthday.

It was learnt that Osibanjo, a Professor of Law and former Lagos State Attorney General, was the choice of the leadership of the party among others.