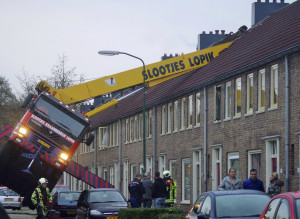 A romantic-minded Dutch man’s marriage proposal which involves a crane went wrong when the unsecured crane crashed into a neighbouring home. Read more from UPI:

The man, whose name was not reported, rented a crane with the intention of lowering himself to his girlfriend’s bedroom window in IJsselstein to serenade her and pop the question, but the proposal went off-script when the unsecured crane toppled over and crashed into a neighbour’s roof.

The crane tumbled into the roof a second time during an unsuccessful attempt to return it to the standing position.

Police evacuated six homes while crews worked to remove the crane following the Saturday morning incident, but no injuries were reported.

The woman agreed to the proposal despite the ominous mishap and the couple left for Paris to celebrate their engagement.