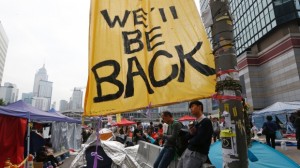 Hong Kong police nabbed pro-democracy activists and cleared most of the main protest site on Thursday, an event marking an end to more than two months of street demonstrations in the Chinese-controlled city, but many chanted as the site was being dismantled: “We will be back.” Reuters report:

Most of the activists chose to leave the Admiralty site, next to the Central business area, peacefully, despite their demands for a free vote not being met. But the overall mood remained defiant.

Groups of up to four police arrested holdout protesters one by one, hours after workers used wire cutters to remove barricades and dismantle bamboo scaffolding.

Martin Lee, one of the founders of the main opposition Democratic Party, student leader Nathan Law, media mogul Jimmy Lai and legislators were among those arrested.

Lai said 75 days of protests would never have been enough to see the demands met.

“We are not so naive,” he told CNN before he was arrested. “We know there will be many battles before we win the war.”

Hong Kong Federation of Students leader Alex Chow said: “You might have the clearance today but people will come back on to the streets another day.”