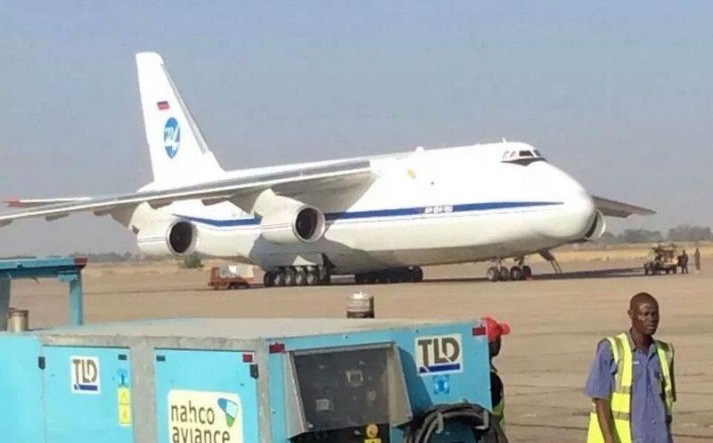 The Russian cargo aircraft, which was intercepted by operatives of the Nigerian Air Force at the Mallam Aminu Kano International Airport, Kano on Saturday, has been released.

The Chief of Air Staff, Air Marshal Adesola Amosu, who announced the decision of the federal government to release the aircraft during a press briefing he jointly addressed with the Defence Attache of France to Nigeria, Col. Mark Hubert, in Abuja on Monday, said this follows a clearance with the French Government that contents of the controversial aircraft belonged to the French military.

According to reports, the Cargo plane, an Antonov AN 124100RA82038, with flight number, TTF 9042, which originated from Bangui, Central African Republic and was en route Ndjamena, Chad, before it landed at the Kano Airport due to technical difficulties, was carrying 24 military hardware including a vehicle, helicopters and blades.

There are also two helicopter Gazelle, weighing, 2, 746 kg, destined for Istres, a community in Southern France.

At the press briefing yesterday, the CAS said that it became necessary for the government to release the aircraft because of the long standing healthy relationship between Nigeria and France, which according to him, remained very cordial.

He added that the French had been very supportive to Nigeria and their relationship with the country was valued.

He said that security forces at the Aminu Kano Airport had to resort to the standard procedure of conducting checks on the aircraft because it had no clearance to operate at the airport even though the French Government was given an annual block clearance by the Ministry of Foreign Affairs to operate in the country.

According to Amosu, investigation into the aircraft became necessary because a notification should have been issued by France in spite of the block clearance if the aircraft’s destination was Nigeria.

He explained that the notification was not issued because the aircraft left Bangui, in Central Africa Republic with Ndjamena, Chad, as its destination, and had to land in Kano because the airport in Chad was too busy at the time.

He said, “A Antonio Aircraft with registration number RA 820388 departed Bangui, Central Africa Republic on December 6, 2014 for Ndjamena, Chad. We had no record of clearance of the aircraft to operate in Kano. With the French Government, we do have a block clearance for a year but the block clearance has some exceptions.

“We have some elements that ought to be avoided: the aircraft must not carry toxic waste; it must not carry nuclear wastes, weapons troops and other controversial equipment.

“We followed the standard procedure to check, and we did not get adequate clarification from the crew. One of the issues has to do with language.

“However, we just got clarification from the French that the items on board belongs to the French military. We respect that; we have a good relationship with the French Government and we respect that. .. By this briefing, we are releasing the aircraft…”

The Air Chief noted that what transpired in Kano was normal as Nigeria like all the other countries, had a responsibility to check such a controversial aircraft to ensure that weapons are not airlifted to foment trouble in other parts of the world in this era of global terrorism.

Speaking also, Col. Hubert said that the items aboard the aircraft were used by the French military in CAR and were being taken to the French Central Operational base in Ndjamena, for onward movement back to France.

The French Defence Attache, who stated that the aircraft was not carrying arms and ammunition as widely reported, said that the items on board the aircraft included two gazelle helicopters, spare parts for the aircraft and a rover car, which was corroborated by the Chief of Air Staff.

This is the third time since 2009 that aircrafts reportedly loaded with military hardware would be intercepted in Kano and they would be released after the conclusion of investigations.