Home Metro News Why The US Has Not Been Able To Help Nigeria End Boko...
Facebook
Twitter
WhatsApp 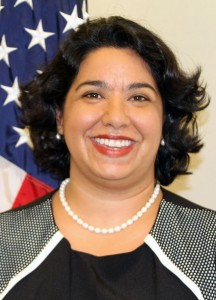 Deputy Missioner, US. Embassy,Abuja, Mrs Maria E. Brewer has explained why it seems like the country has not been effective enough in the fight against Boko Haram insurgency.

Brewer, who spoke at the Hubert H.Humphrey 2014 Annual Lecture held at the Nigerian Institute of International Affairs, Lagos, explained that the US is in Nigeria to work with the country and not for it. Besides, winning the war takes more than military prowess.

The diplomat, who spoke under the theme, Managing Down Insurgency:The American Experience, affirmed that Nigeria is the United States’ most important strategic partner in Africa. The US therefore wants the country to win its war on terrorism. But the US has learnt that defeating terrorism requires more than just military power, it requires economic development in impoverished areas, where extremism takes root, accessible education opportunities for all and a free and fair press that can report openly and without fear of reprisal.

“Fighting terrorism requires civilian and military leaders to work together to both defeat the enemy on the battle field and address the root causes of conflict,” said Brewer.

“Focusing primarily on the population, rather than the enemy, and reinforcing the legitimacy of governments at the local, state and federal level, reduces the influence of terrorists. This can often only be achieved in concert with political reform to improve the quality of governance and address the underlying grievances of the community, many of which may be legitimate,” she added.