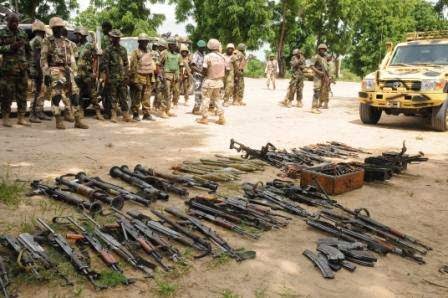 The military has offered reasons behind the seemingly prolonged time it is taking to bring the ongoing insurgency in the North-East of Nigeria to an end.

The Director of Defence Information, Major-General Chris Olukolade, in an interview with Channels Television yesterday, explained that the security forces are operating within the operational limits of conventional warfare.

He said, “The motivation of the Nigerian soldier is based purely, first of all, on patriotism and service to fatherland.

“In that case, the motivation here will be different from somebody who is driven by suicide instincts, people who believe they are just there to die for whatever ideology they are holding on to.

“The implication of this is that whatever is motivating us is parallel, is different. We will keep working for our country and protecting our people from those characters that seem to be driven purely by suicide”.

The Defence Spokesperson also reacted to the concerns over the weapons issued to soldiers in the counter-insurgency mission.

“On the issue of weapons, on a constant basis, the needs are being addressed. It’s not as if the needs are not acknowledged, but after being acknowledged the important thing that should interest us is ‘are there efforts ongoing?’ Surely efforts are ongoing.

“Efforts are on to ensure that these weapons are available and working. Yes, at a point they may not be enough because there is wear and tear once there is battle ongoing. There will be expendables, there will be weapons that will stop working. The efforts will then be to replace and improve on the stock”.

Major-General Olukolade said that is where the effort (replacement and improvement) is been concentrated at the moment and assured that the authorities are making good improvement.

Giving an insight into the modus operandi of the Boko Haram insurgents, the Defence spokesperson explained that “…they come en mass with so many people they’ve come to waste”, adding that “much as they can fight roughly and waste themselves, we (military) must be tactical and strategic in our approach”.

Olukolade also gave the assurance that the rescue of the Chibok girls remains a key part of their mission.