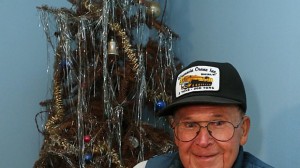 Neil Olson had a Christmas tree when two of his sons went off to war in 1974, and he vowed not to take it down until all his six children returned to his Wisconsin home for Christmas. The same tree, he says, is still standing in his living room, for the past forty year! Yahoo! News has more:

Olson’s oldest son was injured in the Vietnam War, and his disability has stopped him from returning to Wausau from Washington state for Christmas. So the tree has stayed up, still covered in the same ornaments, tinsel and lights as the day Olson decorated it. And the needles, though yellowing, are still there.

“The needles are kept on for a reason,” Olson, 89, told the Wausau Daily Herald for a story published Wednesday. “It’s supernatural, I say.” Five of Olson’s six sons live in Wausau. His youngest, Rich Olson, said the tree has become part of his father’s furniture.

“It’s like family now. I hate to take it down,” he said. Despite its permanent status in his home, Neil Olson hasn’t flicked on the lights since the year he put up the tree. The large, multi-colored lights are now nearly 100 years old, he said.

This is a close-up of the 40-year-old Christmas tree that sits in the living room of Neil Olson of W … “It’d just blow up on me,” he joked. “All that dust on there. It’d be like an atomic bomb.” Olson said he still hopes his oldest son, with whom he still talks, will make it home for Christmas one year. “I bet you if my sixth boy comes home, the needles will drop right off,” he said.