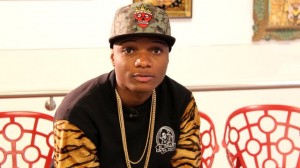 He definitely didn’t have the best of years in his music career and his album wasn’t as hot as it was anticipated, but Wizkid still leaves his mark.

World’s leading music magazine Rolling Stone rated Wizkid’s sophomore effort as one of the ’15 Great Albums You Didn’t Hear In 2014′.

Writing about the album, Rolling Stone said “Arriving in September, ‘Ayo’ placed the biggest of the latter alongside new tracks that grab slang from Jamaica and salute women with a “bum bum bigger than Bombay.” Throughout, the 24-year-old uses deft, nimble flows to glide over complex beats and he writes hooks that will keep you humming for weeks.”

Pleased about the international recognition, Wizkid posted the screen shot of his Rolling Stone picture on Instagram.