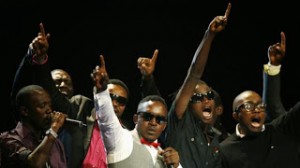 The Oranmiyan Hall of Lagos Airport Hotel was bustling at its seams this past Tuesday, December 16, 2014 as musicians of all generations from every nook and cranny of Nigeria stormed the COSON Extraordinary General Meeting.

From the likes of the iconic Dan Maraya Jos, Chris Ajilo, Laolu Akins et al to the magical Majek Fashek, OJB Jezreel, Azeezat, Black O’ Rice, Kenny St Best, the atmosphere was that of a carnival as gaily dressed musicians back slapped each other.

According to Nigeria Films, the musicians, young and old had gathered to approve the distribution of the sum of N90,000,000 to music industry right holders across Nigeria.

Speaking on the society’s plans to significantly increase its distributable income, Chief Okoroji called on the Federal Government to hasten the implementation of the Copyright Levy Scheme saying it is crucial to the survival of the music industry in Nigeria.

This is the 4th consecutive time since its approval in 2010 that COSON has lived up to its mandate in ensuring that right owners are adequately compensated with what is their due.