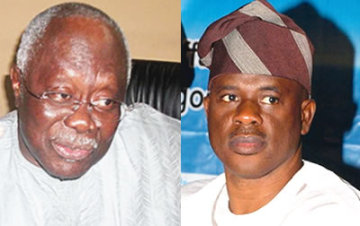 A former Deputy National Chairman of the Peoples Democratic Party, PDP, Chief Olabode George, has called for an end to verbal attacks on his person by an aggrieved gubernatorial aspirant of the party, Sen. Musiliu Obanikoro.

In a statement issued on Thursday in Lagos, the PDP chieftain advised Obanikoro to desist from associating him (George) with violence following the PDP governorship primary election in Lagos State, which recorded an outbreak of violence.

Obanikoro, who is the immediate past Minister of State for Defence, lost the primary to Mr. Jimi Agbaje but he has been telling anyone who cares to listen that Mr. George used armed thugs with assistance from the security agencies to intimidate and harass his supporters with a view to enabling his preferred candidate (Agbaje) emerge the PDP flag bearer.

The statement reads: “One has refrained from engaging Senator Musiliu Obanikoro despite his gross and alarmist provocations. I have deliberately remained distant and quiet, ignoring the stark obscenities of a desperate and obsessed man who is apparently incapable of absorbing the reality of his defeat by a well-bred and better man.

“For Obanikoro to claim in sheer ludicrousness that I, even remotely, identify with any intimations of violence is utter lunacy and blind, vindictive madness. Surely, Obanikoro is possessed and obsessed. He needs immediate psychiatric treatment. He is a desperate sinking man, grasping and thrashing in self-inflicted chasm.

“What is the pedigree of this young man who has abandoned the typical African deference to Elders? We know who sprung from violence and banditry. We know whose antecedents reek in noisome, vagrant, untidy ruffianism (sic).

“Politics is not a do or die affair. No civilized person with impeccable pedigree will seek a tacky refuge in destruction and ruin simply because he has lost in a free and fair contest. Obanikoro should go quietly into that good night if he means well for Lagos.

“Enough of his desperate tantrums”.