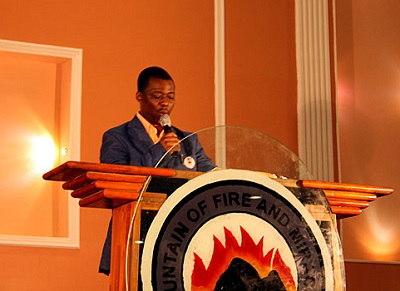 The General Overseer of Mountain of Fire and Miracles Ministries (MFM), Dr. Daniel Kolawole Olukoya, has assured that despite the fears surrounding the 2015 general elections, Nigeria will not disintegrate, arguing that there is a divine agenda for the country.

Olukoya, in his 2015 predictions at the church’s Prayer City, along the Lagos-Ibadan Expressway, said: “Nobody can destroy Nigeria, because it is a country of destiny. No matter what happens, one way or the other, the prophetic agenda and prayers will bail it (Nigeria) out of whatever quagmire it gets into”.

“The Lord will not mind to kill or maim anyone who may want to destroy Nigeria”, he said, noting that Nigeria is strategically located in the continent and its shape in the continent is like the trigger of a gun, meaning the country is the most dangerous or most volatile part of Africa, which must not be toyed with.

Describing the year as one of ‘Multiple Restoration and Unparalleled Favour’ as well as a year of ‘Vigorous Evangelism’ for MFM members, the general overseer also gave 15 Ds to watch out for in the year, as follows: deceit, delay, defilement, despair, disobedience, disbelief and distraction.

He also gave 41 prayer points he described as “machine gun prayers”, to help believers across the world survive in the New Year.