The year 2015 has kicked off and with it comes a lot of different prophecies from respected men of God. 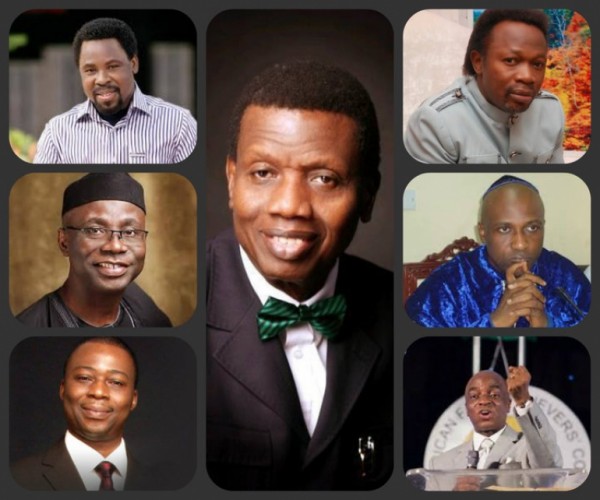 2015 is a crucial year in Nigeria due to the general elections which is to be held next month and top pastors have been giving their revelations to their general audience.

kevindjakporblog explored these pastors revelations and prophecies for the upcoming year.

Recurrent themes are, death, Ebola, Election winner and entertainment, including one which warns of the fall of the Naira.

First is, Pastor E.A Adeboye of the Redeemed Christian Church of God who revealed his at the cross over night.

Adeboye prophesied of the final death of the deadly Ebola virus which has killed over 7,000 people so far, he also warned that God said the world should pray against “massive calamities, massive earthquakes and strong hurricanes and typhoons.”

As for the February election, he said: “Unfortunately, because it is election year, I can’t tell you all that God told me about Nigeria. But I will tell you this: “By the end of the year, many will say ‘all is well that ends well.’”

Well Abuja based Prophet Iginla did not agree with Adeboye’s prophecy and said that Ebola won’t die but will in fact come back into Nigeria.

He revealed: February Elections: No matter how powerful or well-organized 2015 election is, it will be faulted. I am not a politician nor belong to any political party, I am just speaking God’s mind. The person sitting on the seat might not be perfect, but he will retain the seat. It’s not guess-work. Howbeit, it will be a battle between the lion and the tiger…Shortly after the election, especially on the night of the election, there will be great vandalisation. I see cars being burnt, lives killed.

GEJ’s health and death in Aso Rock: President Jonathan will win, but he has to pray about his health and so many political blows. I pray the two people who enter the Aso Villa will leave together. That’s why we should pray for the woman beside the president. The president and wife should pray that the first lady would finish the tenure together and not losing one before the end of their tenure.

fake pastors: Also, many men of God indulging in voodoo or occultism, mixing white with black will experience God’s judgement in 2015. Great judgement in the sense that they will be exposed and lots of things will happen that will be the end of such ministries. I saw a very popular man of God who is highly respected mourned.

The reason is that his wife will be called to glory. It will be a great shock to him because he is highly respected. I am not permitted to mention his name.

Plane crash: I see great politicians and ministers in one aircraft. Three prominent faces were among them, but the plane crashed. They should be careful of traveling in group, irrespective of where they are going…Specifically, Kogi State Governor should pray to survive 2015. I saw him struggling for breath.

Entertainment Industry: A very popular musician, young artiste who sings secular songs should pray against death. He is like someone trying to sell his soul to the devil and it resulted to death. I am not permitted to mention his name.


ASUU: I see ASUU strike and it will be long and will shake the system, but restored later. I see Russian economy under attack by a strange hand. They have to pray so that a strong country like that won’t be brought low prowling for survival.

Death: I see a former president of Nigeria giving up the ghost this year. And people trooping down to his home state for burial. His candle light has burned out already and nothing we can do to it.

Mountain of Fire and Miracles Ministries, General Overseer, Dr D.K Olukoya spoke in parables, saying: “I will speak in parables. This year is going to be a mysterious, cautious and dribbling year, so, you will have to find the solutions instead of diagnosing the problems carried by the year.”

General elections: This year’s election will throw up a lot of issues. President Goodluck Jonathan will do everything to win a second term, however, he needs 14 days prayer to have a peaceful reign to enable him complete a second term. Chairman of Independent National Electoral Commission (INEC), Prof. Attahiru Jega will be confused during the polls. There will be several gimmicks to cajole the INEC to rig the election. E-voting will not work. There will be ballot box snatching and stuffing during the election.

GEJ’s health: The President should also commit his health and that of his wife to prayer. Jonathan is in the midst of enemies who are after his life.

Economy: The stock exchange will rise in the early part of the year. Effect of devaluation of naira will continue till around August. Minister of Finance, Ngozi Okonjo-Iweala, despite her World Bank background, will not be able to make appreciable impact on the economy. Some banks will collapse and one of the dead banks will be resuscitated.
Entertainers: Journalists and Nollywood stars need prayers against sudden death. National secretariat of Nigeria Union of Journalists (NUJ) will experience crisis.
ASUU: Some universities will be shut because of cultism and some Vice Chancellors will be queried.
Plane Crash: We need to pray to avoid plane crash in Lagos, Abuja and Kano airports. Presidential jets should be sanctified to avoid artificial disaster.
Ebola: There will be fresh cases of Ebola in the year, let those in the health sector double their efforts.
Death: We should pray against death of one of the outgoing governors, a first lady and communication guru.

Pastor Tunde Bakare of the Latter Rain Assembly, based his revelation on the Chibok girls.

He said: “The Chibok girls will be returned this year; some people will say ‘they are just using religion to deceive themselves. How will the girls be rescued?’ You will see. I didn’t say it, it is what God said and I believe it.”
And then prophesied joy!
“Whether you are from the East or from the West or from the North or the South, you will experience joy in 2015. Other nations will say ‘how did they do it.’ It will be indescribable joy. The nations of the earth will testify. I bring good tidings of joy to every part of the nation…”

Apostle Johnson Suleiman had sad news for the nation, saying the 2015 election would be a replica of June 12.

He urged Jonathan to be careful as there are plans to assassinate him, he also urged the Uk to pray for the health of their Queen.

General Elections: 2015 presidential election will be rigged, marred in violence and end up in court case.2015 election is another June 12. The man who truly won will not govern or rule.
Men of God: A great Pentecostal man of God been called to glory. A popular Abuja pastor needs serious prayers. I saw mourning. Prophets who deceive people, collects their properties, charge money, will face great judgment this year. A great man of God whose first name begins with 3rd letter and Surname with 15th letter needs serious prayers. I saw serious crisis and crying. Please let’s pray for him.

Economy: I saw the Naira falling greatly. It became N200 (two hundred naira) to 1$ (a dollar).

Entertainment Industry: three popular musicians will die; one of them is a young boy.

Also, he talked about the Kaduna state election, saying “El Rufai should go and sit down. For abusing Jesus, he will not win Kaduna election.”

T.B Joshua of The Synagogue, Church Of All Nations (SCOAN) revealed that 2015 will be a year of good morning.

Saying: “If you are expecting a New Year, you must be pure in heart,” he stressed, reminding the faithful of Jesus Christ’s words in Matthew 5:8. “If not, the troubled year of 2014 will continue in 2015,” he warned.

“No matter what this coming year brings, if you are more of God, your trials are the soil in which your faith will flourish,” he enjoined the congregation.

“This liberation of your spirit is all you need to have the best year,” he stated.

Bishop Oyedepo of Winners chapel said that 2015 will definitely be a year of clear distinctions.

He stated: “In 2015, nobody will doubt those who serve God; It will be clear that we are only in the world, not of the world; in 2015, my God will wipe away all your tears; There shall be no occasion for mourning or weeping;


Throughout 2015, you are not permitted to bury anyone in your life because there shall be no more death; in 2015, some things that cause you sorrow will be far from you and in 2015, you will not need any medication to be healthy.
There shall be a rise of many giants – giants in all sectors of human endeavor; Men like nations will rise in the year 2015; Men that will command attention of many nations shall arise in 2015 and God has brought us into the realm of heaven on earth, where men will live like angels”

Nigeria is a multi-religious nation with Christianity being one of the major religion.

There are over 70 million Christians in the nation alone who belong to different churches.