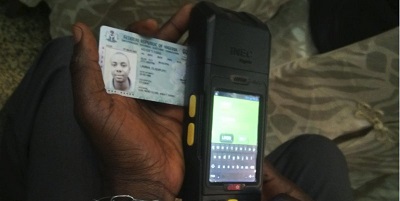 The Independent National Electoral Commission, INEC, on Tuesday said it introduced card readers for voters’ accreditation in order to verify the rightful owners of Permanent Voter Cards, PVCs.
http://www.nikefreerunshoesplus.com nike free 5.0
The Electoral Officer for Baruten Local Government Area of Kwara, Abdulganiyu Bello, stated this in Kosubosu at a meeting with stakeholders in the area.

Mr. Bello said the device would avert impersonation and voting by proxy during the general elections.

He urged the electorate to cooperate with INEC officials in ensuring a hitch-free exercise.

“Let’s target peaceful electioneering; I want to urge politicians not to cause any disruption because you believe a particular place is a stronghold of opponents.

“The result in that place might be helpful in the eventual outcome”, he said.

Mr. Bello also said the commission would ensure that no polling unit had more than 750 registered voters.

He added that electoral process in all polling units would hold between 8.00a.m. and 3.00p.m. on election days.

Participants at the meeting had urged INEC to ensure that accreditation begins in all units by 8.00 a.m.

They also appealed to the commission to be patient with voters who wish to clarify issues on election days.